Write Off One Awning….Another Low For Willy.

I left the Tulalip Casino just before dawn as the overnight showers were clearing out.405 and I-90 through the Seattle suburbs were very quiet for a change.The Snoqualmie pass was free of snow due to the mild inflow of Pacific air over the last 24 hours.And as usual once I got over the hump into the dry rolling hills around Ellensburg,the sun came out and it warmed up to 64 degrees. 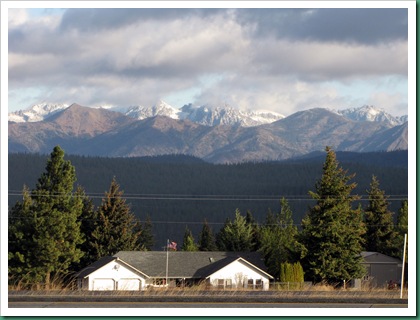 Fresh snow on the hills near Cle Elum.

At Ellensburg I turn south on 82 toward Yakima,climbing a long grade through the dry hills covered with sage brush and brown grass. 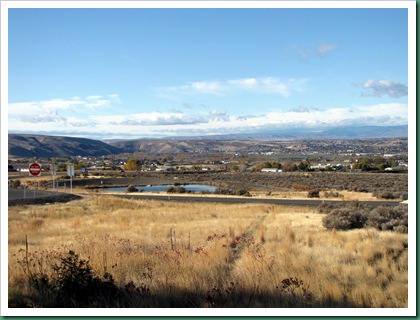 One of my favorite little rest areas north of Yakima,where I ate an early lunch and had a wee nap,as these early risings usually have me nodding off after a few hours on the road. 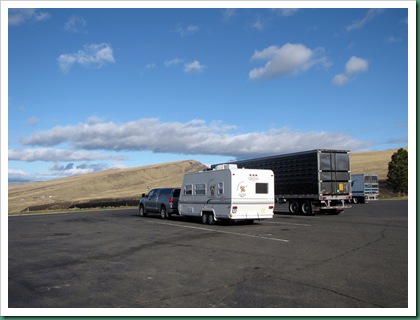 I pulled off the freeway at Yakima for fuel and the answer to the big question….Will the card work this time?The answer…Yes it did and it even spit out a receipt.No standing in a line this time….but wait…I couldn't get out….A car at the pump ahead of me was blocking my exit because she was in the line up inside…Time to chill,Willy.

For the next couple of hours southward through this dry rolling country,the wind started to pick up and by the time I crossed the Columbia river into Oregon,it was a howling cross head wind.I think if I was still driving the Astro van I would have been in 3nd gear doing 35 mph with foot to the floor.I know because its happened before.The silver bullet with its 5.7 V8 was struggling just a tad but still maintaining 55.

I kept seeing something in the drivers side mirror,as the shadow of the trailer showed something at the rear moving.I couldn't figure what it could be,maybe just something in the road surface as there really wasn't anything back there that I could think of, that would cause any fluttering movement.

Then as I was coming down the ramp to enter I-84 heading east toward Pendleton and now with a tail wind,I saw it in my passenger side mirror,billowing out…Oh what a sick feeling.I pulled quickly to the side while still on the on-ramp.The awning had come unlatched and was badly shredded at the rear 1/3.I didn't know what to do,the wind was still howling.Do I just get up there and cut it off? It was open about a foot,so I pulled it down the rest of the way as the wind wanted to carry truck and trailer away in this giant billowing sail. I released the latch and let it roll back up unrestricted.It wouldn’t close to the locking point because the arms were bent just enough to restrict it,so with some grunting and cursing,finally got it latched and with no trailing pieces hanging out.

I only had another half hour to go to get to my nightly destination at the Wildhorse Casino,just east of Pendleton,so I drove the rest of the way with one eye on the road and the other on the passenger side mirror. 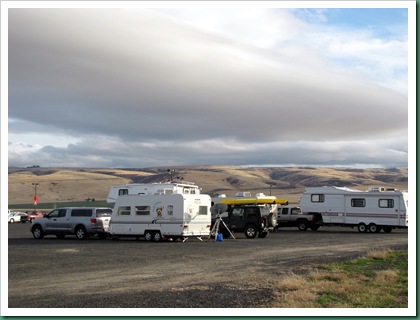 The Wildhorse Casino RV parking area before it filled for the night.

I guess the frustrating thing about all of this, is the fact that the whole awning assembly was brand new last June and cost me $1500.installed +taxes.I don't think its been used anymore than a dozen times since new.And the old original little skinny awning with the one inch tubular arms,never gave me a problem in 10 years.

So now I think that rather than stopping for awhile at Kathrines Landing near Laughlin,I will keep going down to Yuma and set up at Pilot Knob BLM and see if I can find someone to replace the fabric.The Tundra will need its second service also,so Yuma is a best bet to get things done before heading to Mexico.

One last thing for you computer guru’s out there.For some strange reason when I try to change the location on my weather gadget,I go into the site ok, but as soon as I try to select a new location,the computer locks up and IE stops working.This also happens when I enter a friends rather busy website and start making selections.Both sites always worked for me before.I used that same weather gadget throughout the northern trip this summer.I’ve updated the ActiveX and changed to IE 8 from 7,but still have this problem.

Today its over the eastern Oregon mountains and down into southern Idaho,then south into Nevada.A stress free day would be nice,wouldn’t it?YOU BETCHA!

Posted by Wandering Willy at 3:22 AM