“Roger’s Spring”… A Little Side Of The Road Discovery. 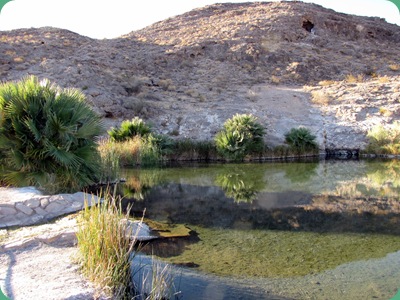 While driving back from Las Vegas the other day along the North Shore Drive highway,I came across a nice little natural spring just off the highway,so I stopped to investigate.By the way that black dot on the hillside is a cave. 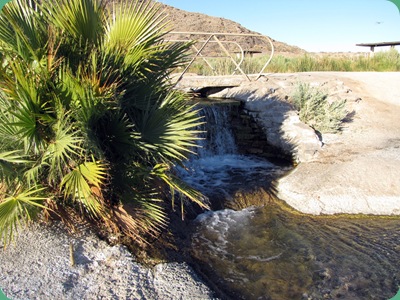 Here is the outflow stream running from the pond at a good clip,so I assume that its a fairly active spring.It’s classed as a warm spring,which is anything under 104 degrees and at about 90 degrees,this was a good one for the tropical fish that were introduced some years ago.And they seem to have adapted very well. 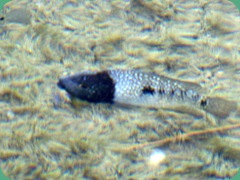 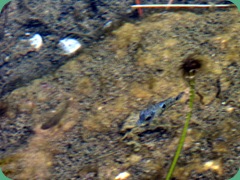 Its a little difficult to get a zoomed shot of a moving fish but here are a few attempts. 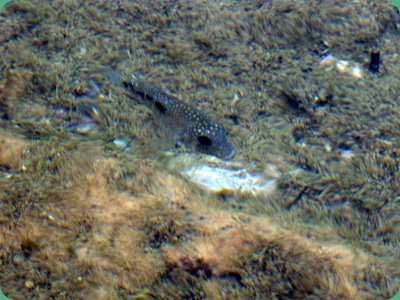 The source of this water is unknown.The theory is that much of it comes from the north around Ely,Nevada,200 miles away,and as this ground water flows south through the carbonate rocks,it finds faults along the way and travels these faults,and eventually due to underground changes at the lower elevations,raises to the surface. The water discharge along this ground fault is approximately 1000 gallons a minute. 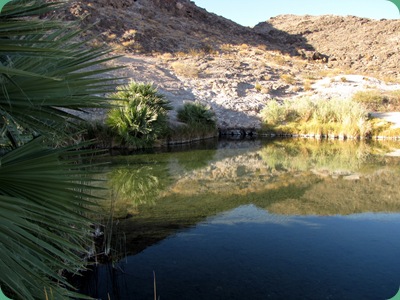 It has a colorful history,as back in 1903,some industrious men tried to dig a channel to divert the water to farmland a distance away,but it kept soaking into the ground.They finally at great expense lined it with cement.As the men were undertaking this project,they drank the water,but found that it acted as a natural laxative,so they named it Slim Creek. 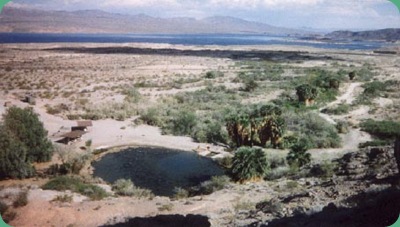 Here’s a shot from above,showing lake Mead in the distance.I stole the photo off the net.Too lazy to climb the hill.

So tomorrow I leave this place and head further south to Yuma.I need to get my hot water tank fixed and making another appointment and dragging the trailer back to Camping World doesn't appeal to me at this point.I may stop at Quartzsite and see if I can get it done.If not I’ll get it done in Yuma.

I did make a 3rd trip to Vegas on Friday and bought a new thermocouple(pilot assy) but that didn't solve the problem,so the only thing left after checking the jet for obstructions, is the gas valve itself,as its a simple basic system with no electrics.The gas valve needs a special tool for removal,I know because I had it done 4 years ago,also in Yuma.Well the trip back to Vegas wasn’t a total waste,as I picked up another 60 minute phone card at Wal-Mart,and then had my first junk food fix of the trip at Taco Bell.

Yesterday was the first day on this trip that I just relaxed and vegitated in the warm sun.With the hot water tank on the fritz,the dirty dishes are piling high and I’m getting ripe……Heat up a kettle you say?…….What kettle!…..Just kidding folks.