The Great Sugar Ant massacre, Among Other Things.

I usually consider myself a bit of an expert on controlling sugar ants when I come to Mexico.(At least I think that's what they are called.)They are very tiny,almost the size of a grain of pepper,and boy! Can they move.Actually I notice that there are two sizes of ant,both very small.

It usually takes a few days for them to enter the RV,sending out the scouts to explore.I then start watching for their point of entry.Many people use powder around all contact points,like Comet,with bleach added,but I find that to be too much of a mess and if you count everything around the RV that touches the ground,including hoses and electrical cables, it become a bit much.

My trick is to use a small bottle of liquid,which is a boric mixture.they love it but it locks their jaw and they starve to death.They take it back to the nest and infect the rest of the colony.

So as soon as I see any activity near the trailer,I set out the liquid and in a matter of hours there are hundreds feeding.I figure if they can be fed out in the open,then they will have no desire to go looking in my trailer for any other food.And so far over the years this trick has worked well for me and within a couple of days they are all gone……Until the other day…..As I stepped out to see how the feeding was going,found myself surrounded by thousands of them on my little palm frond mat,seemingly uninterested in my mixture except for a few So I had to break out the big guns,a can of ant spray that I had purchased the last time I was in Mexico,and within seconds had wiped out most of the colony.

I always thought that I was smarter than the average ant,but this time they threw a scare into me as I was faced with a superhighway 6 inches wide between the trailer and the nest as they prepared for the attack.Last night a few scouts were found inside so I eliminated them so that they couldn't report back to the queen.So hopefully all will be ok today at Fort Trail-Lite. 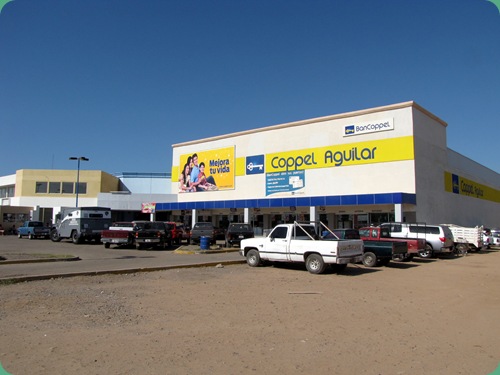 Yesterday I went into La Cruz,10 miles down the Autopista and stocked up, and of course I forgot to take my camera.The pic above was taken earlier in the week.Its the local Mall,with a nice little supermarket to the left and a big department store front and centre in the photo.

After spending 2 and a half months in this area 2 years ago,I knew my way around pretty good as I got 2 (20 lb-5 gallon)propane bottles filled for 200 pesos,$16.32CDN.Then off to the big “Deposito,”beer warehouse,where I turned in the case of empty bottles from 2 years ago,that I had taken home with me.(talk about cheap huh?)The empties are almost as expensive as the full’s.A case of 20 Corona cost 165 pesos,$13.46CDN.

Then the supermarket where I picked up another ant spray,(the last one in stock)Now I’m packin 2 guns.And some nice “carne molida”,ground beef,that I turned into a batch of what my kids call,GRAMMA GRAVY,which is a ground beef stew with onions, fresh green beans and carrots.I now have 3 containers for the future in the freezer after last nights supper.

The weather cooled a bit yesterday as a fresh ocean breeze carried away the high humidity,so an afternoon of cooking was in order.

I’m playing Mr. nice guy right now as I found that the park wifi is out of order and has been since just after arriving a week ago,so have allowed my neighbors to log onto my satellite system to check their daily e-mails.My signal seems to carry quite well to adjacent lots.

Well its almost time for my morning 40 minuter up the beach as its starting to get light.It feels a little cooler this morning so I may have to wear the famous RED RAG,for those of you who are familiar with it….Its just an old red hoody sweater that I refuse to get rid of.

Posted by Wandering Willy at 5:06 AM